Is There Halftime in Baseball? 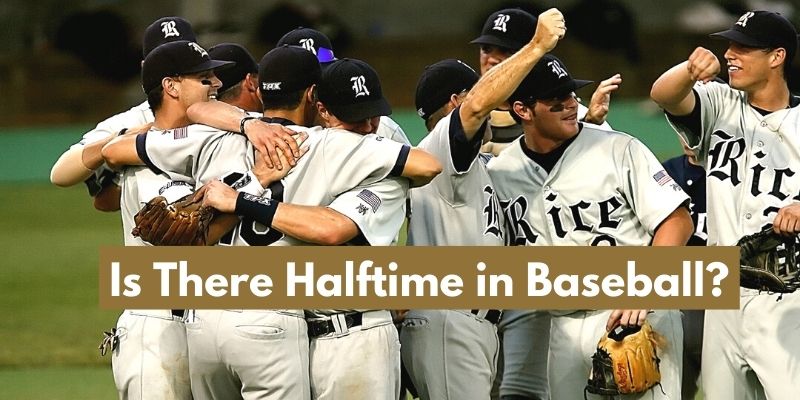 WE MAY EARN AFFILIATE FEES FOR PURCHASES USING OUR LINKS (AT NO ADDITIONAL COST TO YOU). LEARN MORE.

Halftime breaks in sports are essential timeframes for players and spectators. The breaks give the crowd time to refresh, socialize, and take part in other important things. Players, on the other hand, use these times to relax and rethink their strategies. But unfortunately, halftime breaks may not be practical in some games, and they are not available in less demanding and untimed games such as baseball and cricket. This article will dig into baseball games and find out if there are halftime breaks and how they work. So read on to the end to learn everything you need to know about breaks in baseball.

So, is there halftime in baseball?

When and how long is halftime in baseball?Let’s find out.

Does Baseball Have a Halftime?

No. Baseball does not have an official halftime break. However, there are multiple short breaks between and within innings. Also, there is one longer break – a sort of “halftime” – in baseball called the 7th inning stretch. There is no set time length for the break, but normally it lasts approximately 13-15 minutes.

When is Halftime in Baseball?

As the name suggests, the seventh-inning rest period comes after the top half of the 7th inning.

Why Doesn’t Baseball Have Halftime?

There are a few reasons why there is no halftime in baseball. Baseball is not an energy-demanding game, for starters. Simply put, there is not much physical work engaging baseball players, so they do not require additional time to relax.

Also, baseball is not a timed game. Therefore, it would be tricky to determine the best point at which players should take a break. Typically, a match ends when playtime runs out in timed games like soccer; it doesn’t matter whether there is a winning team or not. In contrast, a baseball game ends when one of the battling teams wins. So, it’s no wonder that a baseball match can evolve into the longest game in human history.

Besides, the seventh-inning stretch is not necessarily a must since, though it doesn’t happen often, a match can end in fewer than seven innings.

How Long Are the Breaks in Baseball?

As said earlier, there are multiple breaks in a baseball game, including one break in every inning. The recess periods in the first six innings and eighth and subsequent innings are short. Initially, the time limit for these periods depends on criteria involving how the game is being televised.

What Is the First Half in MLB?

Well, it depends on the perspective from which you look at the MLB games. There is no halfway in a major league baseball game, mostly because these games are not time-capped. Additionally, the major leagues do not have limits on the number of innings played.

Theoretically, an MLB game can have hundreds of innings. Unlike in ordinary leagues, battling teams in MLB games can play a couple of extra innings to find a winner. Thus, it can be challenging to predetermine the extent to cap the first half in MLB. Some people, however, refer to the first 7.5 innings (the time before the seventh-inning stretch) as the 1st half.

Betting-wise, the first half is capped at the end of the fifth inning, and the rest as the second half.

Can a Baseball Game End in the 7th Inning?

Yes. A baseball game, including an MLB game, can end in the seventh inning. This happens when the mercy rule is applicable. The mercy rule states that a baseball game can end if the winning team leads by ten or more runs. Note that the precept is usually functional in all leagues, including World Baseball Classic and international competitions. However, the rule most often comes to play in MLB leagues when an unavoidable condition disrupts the game.

How Many Innings Are There in Baseball?

A win is the primary rule of an MLB league game; no ties are allowed! As such, there is no maximum limit for the number of innings in a game. So, theoretically, an MLB game can have infinite innings.

On the other hand, five innings is the minimum number of innings to be played. Notably, an umpire can declare a win if the winning team is dominating after at least 15 outs of play, so that means a baseball game could be as short as five innings. Note, however, that most baseball games are scheduled to end after nine innings. Some, mostly high school and non-televised baseball games, end after six or seven innings.

How Many Pitches Are Made in a Baseball Inning?

An inning in a baseball game can have as few as three pitches. The maximum number of pitches per inning varies depending on the pitcher’s skills. A skillful pitcher might pitch just three pitches in an inning, but beginner pitchers usually have a higher pitches-per-inning rate than an average pitcher. Research shows that, on average, a pitcher delivers about 15 pitches per inning.

Although baseball is untimed and can be a pretty long game, official halftime is unnecessary. Adding a long halftime in baseball games would result in extended playtime, which could eventually have a significantly negative impact. Essentially, the short breaks between innings plus the seventh-inning stretch are enough. Besides, the game is not as highly demanding as sports such as soccer. In addition to that, some baseball rules protect baseball players’ health. They prohibit overworking the players. For example, the CIAC Pitching Rules instructs that a pitcher should pitch not more than 110 pitches per game, regardless of their skill or power. Further, they specify a mandatory resting time. Thus, there are no designated break periods necessary between innings for baseball players.

Q1: What was the longest baseball game?

Q2: How long is a baseball game?

There is no set time for a baseball game but a regulation nine-inning MLB game lasts three hours on average.

Q3: What can lead to the early termination of an MLB game?

Extreme weather conditions are the most likely cause for ending an MLB game in fewer than nine innings. The “mercy rule” is also a probable cause for the early suspension of a baseball game.

Q4: When does the baseball season start?